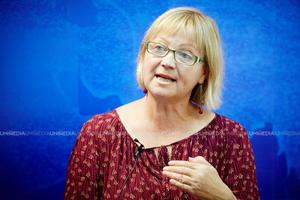 Since 1986 she is engaged in the political and women’s movement and has been active in fostering  children’s rights and the development of NGOs and civil society in Moldova.

- Promoted and vigorously fought for the adoption of the Law on Reproductive Rights, which legalized a woman’s right to choose.

From 1993 – 2002: President of the Executive Board, Christian-Democratic League of Women CDLW. It was the first democratic womens’ socio-political organization in the Republic of Moldova.  It had a dual mission: 1. to unify women in the political process of building a democratic state (post independence from USSR) and 2., to provide help to underprivileged groups and combat poverty.

From 1999 - present: Co-founder, Executive Director, former President “Political Club of Women 50/50” with its mission to create a democratic society in wich men and women participate equally in the decision-making processes.

From 2001 – present: President of Foundation AGAPEDIA Moldova – with its mission to prevent child abandonment, protect children at risk and provide effective social services.

The foundation achieves its mission via three key activities:

1. Services and support for vulnerable families in order to prevent child abandonment, by providing European standards in childcare and to promote the principle of “a family for a child” in the adoption process;